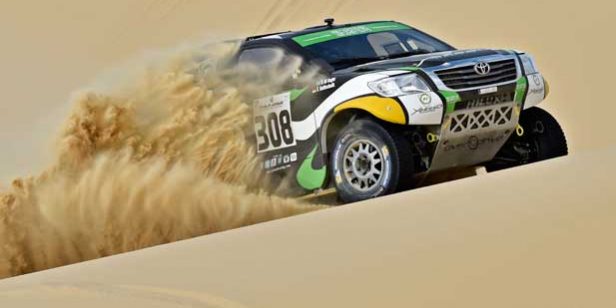 Overdrive Racing clinched second, fourth and sixth place in the Pharaons Rally – fourth round of the FIA World Cup for Cross-Country rallyes – which was run last week in Egypt, from El Alamein to Tibniya, right under the Pyramids of Gyza.

Saudi Yazeed Al-Rajhi, navigated by German Timo Gottschalk, didn’t managed to repeat last year’s victory, despite winning three of the five special stages. Al-Rajhi had to give way to Nasser Al-Attiyha, who this year won the Dakar Rally as well as the last Sealine Cross Country Rally.

After winning the opening stage, Al-Rajhi-Gottschalk got stuck in a sandy depression between two dunes in the second, losing valuable time in the general standings. Two more victories in the third and fifth stages were not enough to regain the leading of the race, however the second position was still a satisfying result for the Saudi, who is already looking forward to the next rallyes: “It was a nice race, we got more experience, which will be useful for the future. Good race, good organization.”

After a good start, Brazilian duo Reinaldo Varela and Gustavo Gugelmin had some problems in the last stage and finished sixth overall, giving the fourth position up to Pole Marek Dabrowski and Jacek Czachor. Both the crews gained good points in the FIA World Cup general standings, lead by Russian Vladimir Vasilyev.

The FIA World Cup for Cross Country rallyes will come back in the end of June with the Italian Baja, the first of four European rounds to take place in Europe this Summer.

In the meantime, the Ruta Desafia 40 – first round of the Dakar Series – is starting today in Argentina: the best off-road drivers from all over South America will fight for the victory aiming to get a spot in the Dakar Rally 2016.