In the fifth round of the FIA World Cup for Cross Country Rally Overdrive Racing can count also on current leader Vladimir Vasilyev.

The FIA World Cup for Cross Country Rally comes back after a break of one month and a half with the 22nd edition of the Italian Baja. From Friday to Sunday the fifth round of the Championship will take place on the flood plains of Pordenone, Northern Italy.

Overdrive Racing lines up three drivers: Brazilian Reinaldo Varela, Pole Marek Dabrowski and Russian Vladimir Vasilyev – current leader of the World Cup – who has just joined the team after running the first four rallies with the Mini. This season Vasilyev, navigated by Konstantin Zhiltsov, won the Abu Dhabi Desert Challenge, finishing second in Qatar’s Sealine Rally and the Baja Russian Northern Forest and third in the Pharaons Rally. Now he hopes to extend his lead in a race that he already won three years ago.

“We are delighted to welcome Vladimir and Konstantin to the team and look forward to working with them in Italy,” said Overdrive Racing’s team director Jean-Marc Fortin. “We have a strong team for this event and the series of Bajas in Europe over the summer. We have a good record on the Bajas. The slower, desert rallies are behind us and we can hopefully take advantage of the traits of the Hilux to achieve a third successive win in Italy and continue that into the other events over the coming weeks.”

Dabrowski and his co-driver Jacek Czachor are third in the general standings and aim to improve the result of last year when they standed on the lowest step of the podium after a close fight with Vasilyev. The Brazilian duo of Reinaldo Varela and Gustavo hold equal fifth in the championship standings with Dutchman Erik van Loon and finished seventh in Italy last season after winning the event in 2013.

The Italian Baja, organised by the Fuoristrada Club 4×4 Pordenone, will start on Friday evening with the opening 11.8km super special stage from Spilimbergo. On Saturday morning the second leg will start from Pordenone and finish in Codroipo two special stages of 101 km. The third day will take place on Sunday morning and two more sections will be run over the gravel trails on the Tagliamento flood plains for a total of 415,80 competitive kilometres. 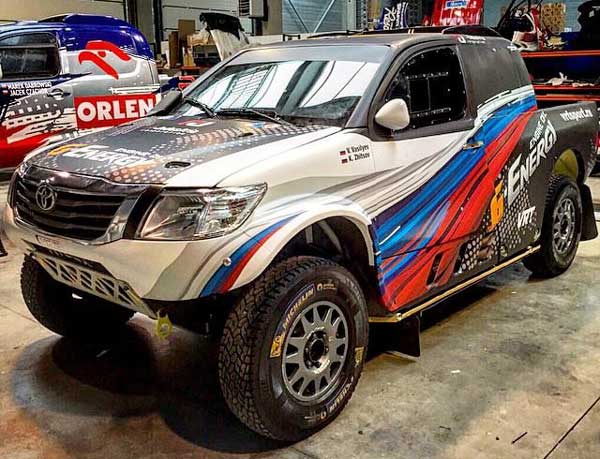 The new livery of Vasilyev’s Hilux