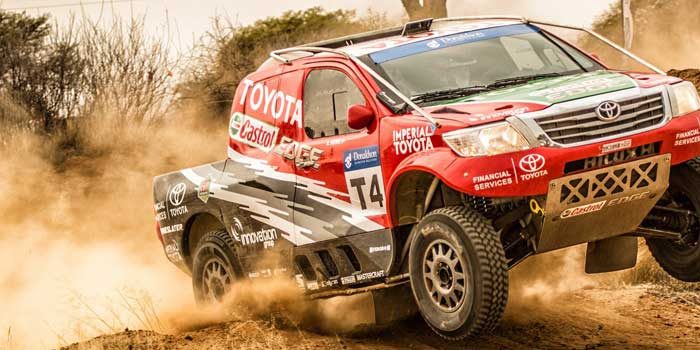 At Atlas Copco 450 the South African Team will try to win the last round of the Donaldson Cross-Country Championship.

The Atlas Copco 450 will close the 2015 Donaldson Cross-Country Championship on October 30 and 31 in Westonaria, Gauteng, South Africa. Castrol Team Toyota will have the chance to score the perfect season, having won all the five races so far.

“It has been a great year for us,” said Castrol Team Toyota Team Principal, Glyn Hall. “We’ve managed to win every round so far, sealing the championship with a round to spare. Winning the final round too will be the cherry on top.”

The main protagonist of Castrol Team Toyota has been Leeroy Poulter, who drove the Toyota Hilux to the victory of the Donaldson Championship at his second season of cross-country racing after collecting the South African National Rally Championship first place in 2014 and finishing runner-up this year. “Racing the Hilux is very different to driving the rally car,” explained Poulter. “Obviously the vehicle is heavier and much taller, but it can also withstand much tougher conditions, and it took me a while to get fully into it.”

Poulter and his co-driver Rob Howie managed to won four out of five rounds this season, while their teammates Anthony Taylor and Dennis Murphy conquered the prestigious Toyota 1,000 Desert Race. For both the crews the Atlas Copco 450 is a great chance to train and get the Hilux ready for the 2016 Dakar Rally. The team will be hoping for dry weather, so as to find meteorological conditions similar to those of South America. Taylor and Murphy will be driving the car that Giniel de Villiers and navigator Dirk von Zitzewitz used in Morocco, while Poulter and Howie will be fielding a brand new machine.

“We will be running the two Hilux race vehicles that are going to the Dakar, as the team has to prepare them for local regulations in addition to prepping for South America,” explained Hall. “Anthony’s feedback will also be extremely valuable, and we hope to sign off on some changes we implemented after taking part in the Rally of Morocco earlier this month.”

The 2015 Atlas Copco 450 will be based around the Kloof Country Club in Glenharvie, and the qualifying event starts at 11,30 (local time) on Friday, October 30. The main race is set to start at 07,00 on Saturday, and will finish in the afternoon around 17,00.